In an article published Thursday morning, The Washington Post detailed the U.S. Chamber of Commerce’s recent evolution and growth, as well as the way we are “navigating dramatic cultural change that’s transforming the worlds of politics and business.”

U.S. Chamber President and CEO Tom Donohue and Senior Executive Vice President Suzanne Clark sat down with The Post to discuss the U.S. Chamber’s commitment to rebuild the political center, our efforts to work with both Democratic and Republican lawmakers, and its continued leadership in Washington.

“The largest and most powerful corporate lobbying group in Washington is changing the way it evaluates lawmakers for the first time in 40 years,” reporter James Hohmann writes, “launching a $250 million capital campaign to remodel its headquarters and even rethinking its approach to regulation.”

Key excerpts from the piece are below. For the full article, click here.

On the U.S. Chamber’s bipartisan engagement and rebuilding the political center…

During sit-downs with Democratic members, Chamber leaders are explaining how they will change the scorecard this year to incentivize Democrats to work with them. The Chamber has historically relied solely on a handful of key votes, but the polarization of Congress and the rise of party-line voting has skewed the ratings so that it’s hard for Democrats to get good numbers. This year the Chamber is adding two other components. One relates to sponsoring something the business community supports. The other relates to sponsoring bills across party lines…”

“If anybody here ever thought of themselves as working for a partisan place, they should stop,” said Suzanne Clark, the senior executive vice president of the Chamber.

Chamber leaders say they hope these changes lead to more Democratic congressional endorsements in 2020 and beyond.

On the changing culture in Washington…

“One of the things that made this more difficult is all the rules,” Donohue explained. “The House, the Senate and the White House all have 300 to 400 pages of rules of how people can have lunch together, who can run a party, whether you can eat with a fork or a toothpick. … It has made it more difficult. It used to be that you go fight up on the Hill … and then, at 8 o’clock, everybody finishes and somebody would say, ‘Let’s go get a hamburger and a beer.’ We don’t do that anymore!

On the U.S. Chamber’s work with the Trump administration…

To be sure, the Chamber still has many areas of common ground with Trump and congressional Republicans. They’re very happy with the president’s judicial nominees and the tax cuts, and officials have good relationships with many people inside the administration.

And they’re still looking to work with Trump even on areas where they’re not really in agreement, such as immigration.

On the U.S. Chamber’s growth…

The Chamber, which has 499 full-time employees, reports a 95 percent renewal rate among member companies that pay $100,000 or more in annual dues.

Last year, the Chamber reports taking in $233 million of revenue and ending the year with no debt. Donohue, who is in his early 80s, has led the group since 1997. The year he took over, the Chamber reported $68 million in revenue, $11 million of debt, and 279 employees. Audited revenue numbers provided by the group for the past 15 years show that annual revenue has fluctuated in a band between $202 million and $270 million over the past decade.

“I’ve now been here 22 years, and we have gone through stages, like any company or any organization,” Donohue said. “In the beginning, it was trying to stabilize the organization that had gone through some challenges. Then we went through a period where we began vigorous growth. Now we’re going into the next period where we’re looking to the future.”

On the evolution of the U.S. Chamber’s historic building…

The Chamber’s quarter-billion-dollar capital campaign will retrofit its century-old building. The group’s iconic limestone headquarters, directly across Lafayette Square from the White House and lined with Corinthian columns, will be surrounded with scaffolding by July as part of the renovation. They’re planning to add a roof deck, among other major additions.

Part of the rehab is going retro. They’re pulling back ugly teal carpet to restore herringboned wood floors that have been hidden since the 1980s and restoring some of the grandeur envisioned by architect Cass Gilbert, who also designed the Supreme Court building. The headquarters was constructed from 1922 to 1925.

“This is kind of back to the future. The idea is coming back to our roots,” said Clark. “We do 2,000 events a year, with some 65,000 people. In the last two weeks, 17 finance ministers were here just during the IMF World Bank meetings. You can’t do that and then have your building be all teal and ugly.” 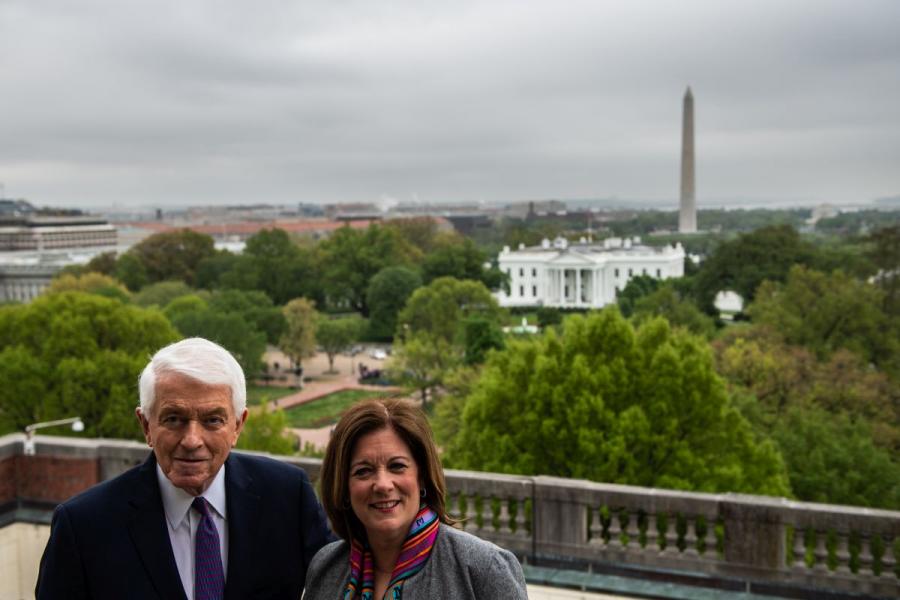